The zombies are coming! Quick: What should you scavenge together for the impending attack?

Earlier this week, Dragon Con â the annual sci-fi, fantasy and comic book convention â hosted a panel covering communication in a post-apocalyptic world. According to Wired's coverage of the conference, several attendees may have been disappointed by the panel's primary topic of discussion: amateur radio.

While amateur radio may not be as exhilarating as fighting zombie hordes, it may be the most effective tool during an apocalypse. So why invest in amateur radio equipment for a potential zombie apocalypse (you can never be too prepared!)? Like most investments, amateur radio's success depends on diversification. 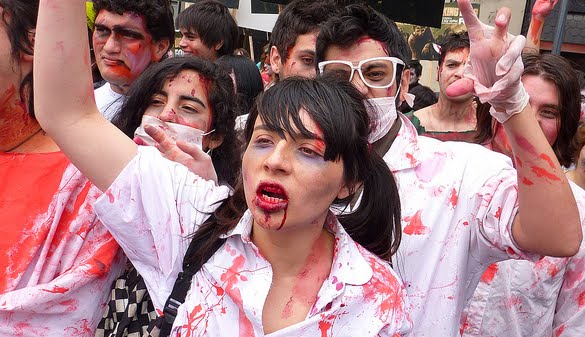 The amateur radio community has millions of members worldwide and several hundred thousand licensed operators in the United States. This fact combined with the dedication of local radio clubs makes ham radios one of the best communication systems during a zombie attack.

Amateur radio operators can send out signals from their personal stations either in their homes, on the road, or even from the International Space Station. If these operators send their signals on the right frequency, local radio repeaters can detect the signal and re-broadcast them.

Repeaters receive signals on a certain frequency and then transmit those same signals on a different frequency. Additionally, these stations have more powerful antennas that allow for broadcasts across a greater range. Connecting multiple repeaters allows for even greater distance broadcasts.

Local radio clubs or individual operators maintain these repeaters, and they allow others to transmit on them. So why might this work better than traditional communication channels during a zombie apocalypse?

Downed telephone lines and cell towers without power can lead to spotty or nonexistent coverage during a disaster. A huge network of amateur radio repeaters can utilize pockets that still have power, and generators can keep them running as well.

Amateur radio's not just for zombie attacks, however. Ham operators have been instrumental in several real-life emergencies, including search and rescue efforts during Hurricane Katrina.

There's even a group of amateur radio enthusiasts and horror film buffs who started their own "Zombie Squad" dedicated to emergency preparedness.

So if you're gearing up for a zombie battle, don't forget your radios. Finding safety among this huge amateur network may prove more useful than shotguns and baseball bats.

For more information on amateur radio, including how to get your own license, check out the American Radio Relay League.
Posted by Unknown

Our zombie problem is well in control in my area, but if there is an outbreak we're ready! ;)

When tornadoes come through, we listen to the storm spotters on amateur radio. When power was out for several days, and the cell phone towers gradually lost backup power, we were able to communicate with friends and family across the local area. (4/27/11 to 5/3/11) When I go hiking or on bike rides, I use a rugged, weather resistant handheld radio that I bought for $120 over 10 years to check in with my wife (KB4MOM) instead of my smart phone with a life expectancy of 7.4 drops to the pavement.

It took my wife an hour an evening for about two weeks using the study system on www.hamtestonline.com to prepare for her test. And as it has already been said the ARRL and local ham radios clubs are great resources. In our area you test at the local Red Cross on the first Saturday of the month. It costs ~$15 to test and your license is good for 10 years, free to renew after that.

I do have problems with warbling sounds coming over my radio when alien space ships hover over our house and shine those bright colored lights though. lol.

A happy ham who hasn't had his brains eaten yet.

It needs to be clearly stated that only "LICENSED Amateur Radio operators may TRANSMIT." AND "UNLICENSED OPERATION MAY RESULT IN A fine of upto $250,000 and or a PRISON SENTENCE OF UP 5 YEARS FOR EACH OFFENSE"

So, visit your local "Ham" club and they will be willing to provide information needed to obtain a license.

I'm guessing, from the anonymous comment, that the original post suggested that "...to get your own license, check out the American Association for Amateur Radio." Though a change log of any sort is missing, the change to "American Radio Relay League", is not, strictly speaking, correct, either?

In truth, while the expanded initials for ARRL are American Radio Relay League, the organization does not refer to itself as this in most publicity material. Instead, they primarily call themselves the "ARRL â the National Association for Amateur Radio". This is readily apparent by visiting their website and looking at the top of the page.

"American... Association... for Amateur... Radio."
That does not add up to ARRL.
It's actually the "American Radio Relay League".